Microsoft found that since the year 2000 (or about when the mobile revolution began) the average attention span dropped from 12 seconds to eight seconds.

If you’ve ever found it hard to concentrate on one thing without stopping to check your emails or post to social media, you’re not alone. The average human attention span – how long we can concentrate effectively on a single task – was recently reported by Microsoft to have dropped below the level attributed to goldfish.

This certainly plays to our fears about what the daily flood of social media and emails is doing to us, and to younger generations in particular. However, these figures may be misleading. For one thing, the report contains no real detail for either the goldfish or human attention span beyond the numbers on the web page Microsoft pulled them from.

More importantly, our minds are adaptive systems, constantly reorganising and refocusing our mental faculties to suit the environment. So the idea that our ability…

Hey there, today I’m sharing an innovative green energy and smart product called SolarGaps.
SolarGaps are engineered innovative solar blind technology to generate green energy for your home and reduce your energy bill by up to 70%, something to consider besides Tesla’s Solar Roof.

Both used at the same time, even better, greener, cheaper and efficient energy use.

Here’s his diagram that shows the skills breakdown between the 3 roles:

Ryan states that these roles are still evolving, and nowadays it’s much easier overall to enter the market, «as new tools (like Stitch) make it easy for software developers to set up and maintain data pipelines. Larger companies are pulling data engineers off the software engineering team entirely in lieu of forming a centralized data team where infrastructure and analysis sit together. In some scenarios data scientists are responsible for both data consolidation and analysis».

The author also says that «there is no single dominant path. But we expect this rapid evolution to continue, after all, data certainly isn’t getting any smaller».

For someone with limited mobility, using the sidewalk in a new area can be like driving with no directions, hitting dead end after dead end: there are many obstacles that can prevent access (no curb ramps, too steep of hills, bad surface conditions) and there are next to no resources available that provide this information.

The goal of AccessMap is to enable safe, accessible trip planning on pedestrian ways for people with limited mobility. To meet that end, the people working on the AccessMap project develop tools for trip planning as well as tools for gathering and maintaining open data about sidewalks, curb ramps, construction information, etc.

What the App does is revolutionary because most map applications focus on things like traffic density and finding the fastest route, but very few identify barriers for pedestrians. 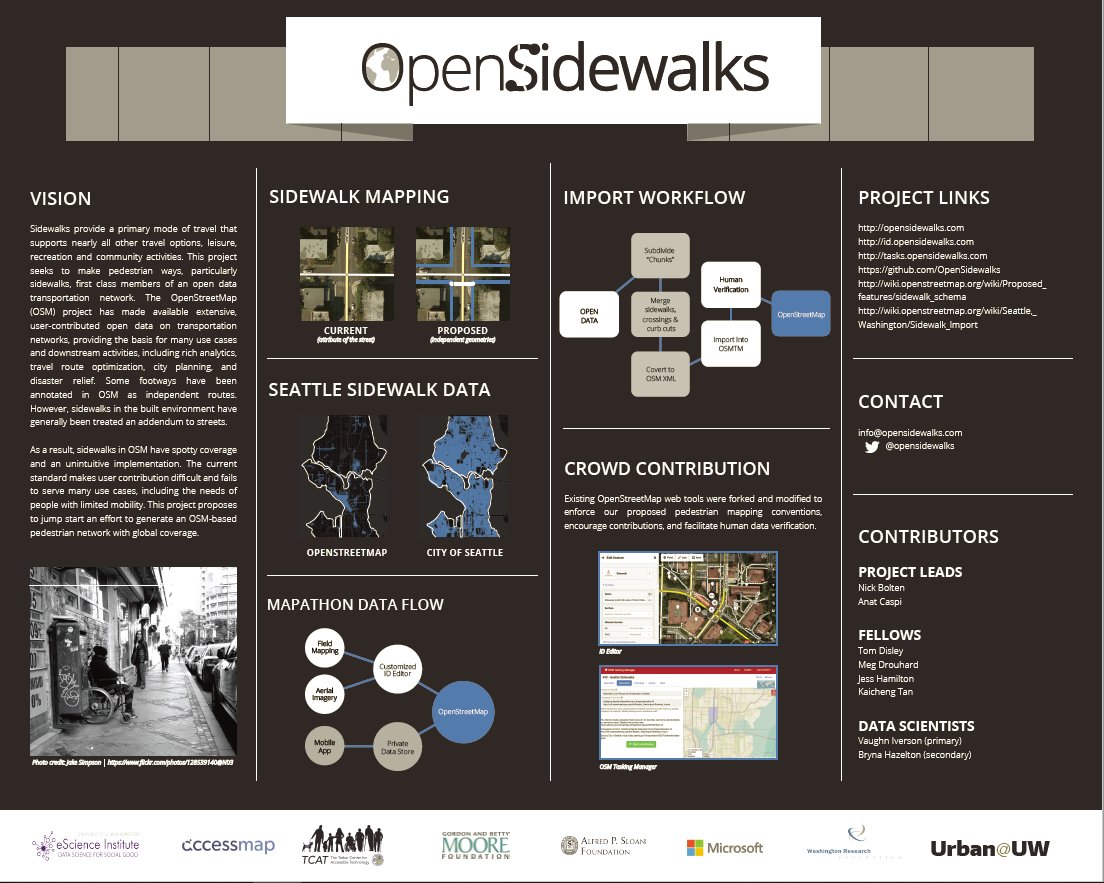 Collecting data for maps that optimize walking routes is not an easy task, but AccessMaps went “all in”, spearheaded by the Taskar Center for Accessible Technology at UW, provides detailed information like the grade of hills and the condition of the pavement, allowing users to put in their mode of mobility and set limits on how steep of an incline they can handle, by identifying routes that optimize not just for time or distance but for things like changes in elevation and curb cuts, making a really big and important change.

END_OF_DOCUMENT_TOKEN_TO_BE_REPLACED

Hey there awesome people, after attending 2 unforgettable days of Web Summit Lisbon 2016 and a few months of inactivity due to educational/personal reasons (such as getting my masters degree on track) I’m back to WordPress again, this time with full strength, jabbing and boxing for a right hook knockout everyday as Gary Vaynerchuk writes in his 3rd book and his daily vlog.

The article called my attention right away, not only because I’m an aspiring Data scientist, but also because data (big and small), information and knowledge mining/management is the “new oil” – maybe even the oxygen – to the second half of 21st century successful organizations (startups, tech related or not).

It’s true, Avant Garde Innovations, the Indian startup founded by siblings Arun and Anoop George from Kerala, has come up with a low-cost wind turbine that can generate enough electricity to power an entire house for a lifetime. The size of a ceiling fan, this wind turbine can generate 5 kWh/kW per day — with just a one-time cost of US$750.

Their goal is to “eliminate energy poverty, reduce dependence on struggling state power grids and create energy self sufficiency for all the needy ones through distributed, localised and affordable renewable energy.
In doing so, we believe we can collectively usher in our world a cleaner environment, new economic prosperity and social change”, by “offering a highly affordable small wind turbine suitable for residential, commercial, agricultural, village electrification and other uses, which is aimed for a market launch during 2016.”

Avant Garde Innovations passionate aim is to “introduce innovative, affordable and sustainable solutions that take renewable energy self sufficiency and energy empowerment to the next level through a distributed and decentralised approach using pioneering strategies the world has not witnessed yet”.

This revolutionary product has also won them a spot in the Top 20 Cleantech Innovations in India, and the company has also made it to the list of 10 clean energy companies from India for the “UN Sustainable Energy For All” initiative under the one billion dollar clean energy investment opportunity directory.

Anyone familiar with Nikola Tesla’s dreams about wireless energy and communication understands that we are nowhere close to being where he envisioned we’d be in 2016, but humanity has to start somewhere….

A team of researchers at the University of Washington have developed a new technology called ambient Wi-Fi backscatter that fulfills Tesla’s dream of wireless energy signal transmittal on a small scale – even though Tesla’s ambitions were much larger and wider in scope than ambient backscatter.

Devices such as this use existing radio frequency signals (radio, television, digital telephony, wi-fi, bluetooth, etc.) to transmit data without a battery or power grid connection with an antenna that picks up an existing signal and converts it into tens to hundreds of microwatts of electricity. It then uses that power to modify and reflect the signal with encoded data.

This approach would let mobile and other devices communicate without being turned on. It would also allow unpowered sensors to communicate, allowing them to be placed in places where external power cannot be conveniently supplied.

New reports from sources that advocate for STEM education, found that while teenagers are interested in subjects like physics, biology, and engineering, they tend not to enjoy their in-school classes – based on an online survey of more than 1,500 teens from around the country.

This discrepancy means there’s room both in and out of school to dramatically improve STEM education offerings for teens, mostly by making them more hands-on and engaging.
Some 81 percent of teens said that they were interested in science. Seventy-three percent were interested in biology in particular. But only 37 percent of students said they enjoy their science class, and even fewer — 33 percent — liked biology class. That’s less than the 48 percent who said they enjoyed non-science classes.

The sample was balanced by region and ethnicity. Differences in outcomes by race, ethnicity, and income were tested for significance at the 95 percent confidence interval. All differences noted in the brief and infographic are statistically significant.

While many teens find more hands-on experiences like field trips and experiments to be most compelling, most instruction in science class involves either textbooks or in-class discussion. A chart compares preferred learning styles compared to teaching methods:

The survey also examined the relationship between students’ family income and access to and interest in STEM fields. Lower-income students were less likely to know an adult involved in biology and less likely to participate in a science club.

Overall, more than 80 percent of teens reported that they thought knowing adults in their desired field of work might help them advance, but just about a third actually knew adults in that field.

The authors of the AmGen and Change the Equation report argue that schools should adopt more inquiry-based STEM curricula and that teachers should receive training in how to teach it. They also argue for stronger ties between businesses and community members and schools.

STEM often makes news when students create or achieve remarkable things—consider thestudents at the White House Science Fair, who shared projects related to everything from pollution to artificial intelligence. The subjects are a priority for federal, state, and local policymakers, who often raise concerns about the dearth of of young people pursuing degrees and career in STEM. The Every Student Succeeds Act, the successor to No Child Left Behind, includes more flexibility for districts and states looking to create or support STEM programs. But this survey hints at the fact that in many schools, science education is still less-than-inspiring.

A few other findings from the report: